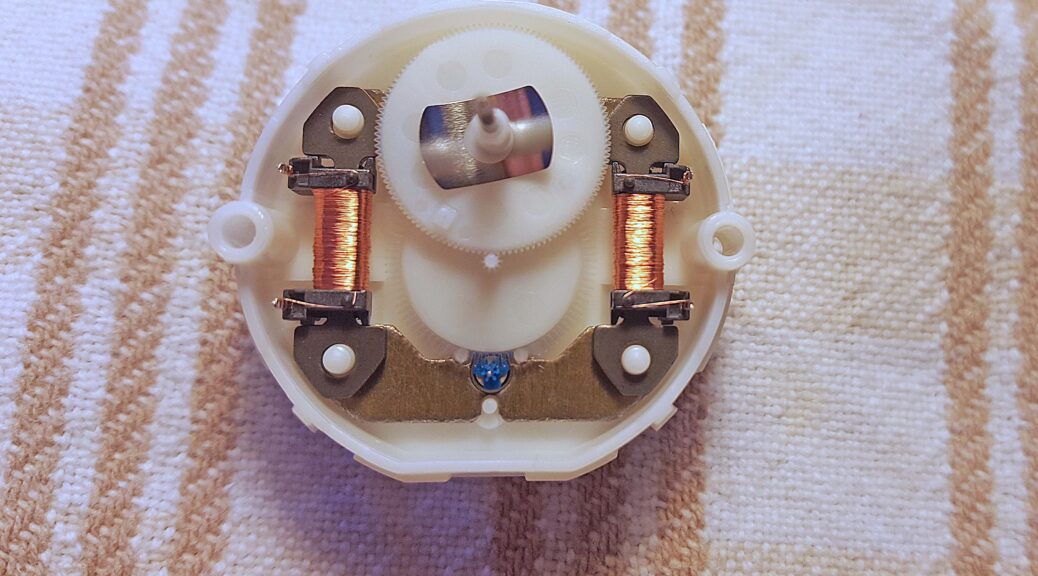 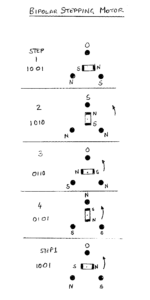 It is clear that if the rotor is left in, say, position 3, and the pulsing sequence starts at 1, the rotor could turn either way to get to position 1. In either case, this would cause a positioning error.  To avoid this, the driver either needs to remember its position in the pulse sequence or it should always be driven a multiple of 4 pulses (one revolution) so that it is always at the appropriate starting position.

The stepping sequence shown in the diagram is that of a typical H-bridge driver. The setting 1001 indicates the polarity of the two coils, with coil 1 being energised with polarity 10 and coil 2 by polarity 01 (i.e. the opposite polarity).  The direction of rotation will be reversed by changing the pulse sequence.  Thus, starting from position 1001, if the next step is 0101 (rather than 1010) the direction will be anticlockwise.  Some H-bridge drivers, such as The DRV8834 Stepper Motor Driver have a ‘direction’ pin that alters the pulse sequence accordingly.  They also remember the last step as long as they remain energised and ‘awake’.

By altering the relative current through the coils, it is possible to achieve coil positions intermediate to the main steps shown above.  The motor shown in this example works well at quarter steps but may not have as much starting torque.  Moreover, it is necessary to keep the coils energised in order to maintain an intermediate position.  The data sheet advises that the driver should be designed to accelerate and decelerate the pulse rate at the start and end of travel to ensure accurate stepping.

Clearly, it is worth using a H-bridge driver for non-trivial implementations.