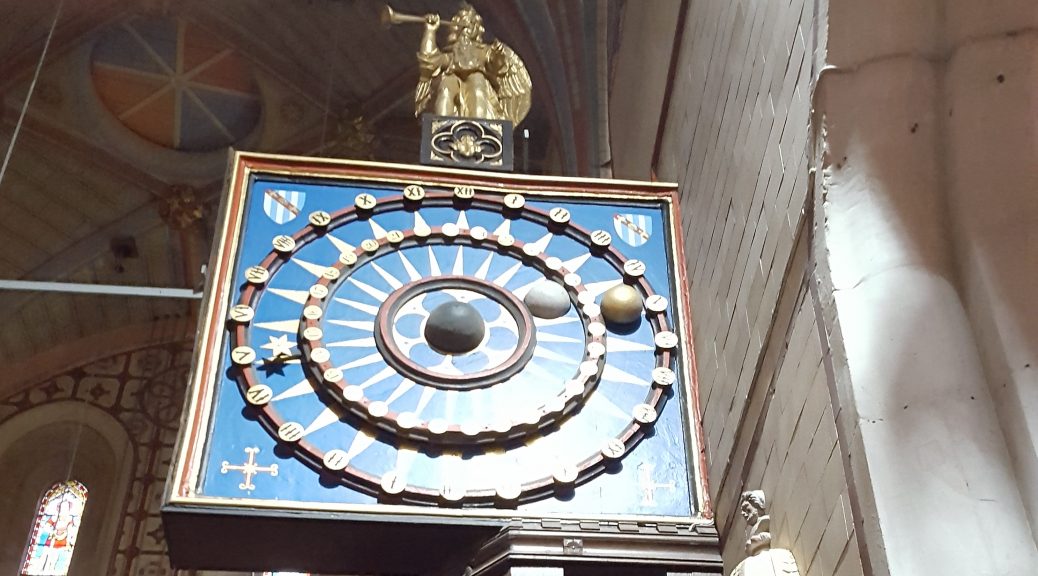 I’m wanting a new project now that I’ve gained some confidence with the Moon Clock.  I wrote some long while ago about Astronomical Clocks.  Observations of celestial bodies were crucial to the ancients, so that they could know the changing of the seasons and when the moon would be lighting up the night sky.  They knew about the major planets and just as the seasons affected life, they predicted other events from observations of the night sky.

At one time, astronomy and astrology were two sides of the same coin.  The stars in the night sky were grouped into ‘constellations’ given names of mythical figures, and if you were born at the time a certain planet was ‘passing through’ [i.e. orbiting past] a certain constellation, this could predict your nature and future.

The ‘ephemerides’ program that I used for the moon clock can calculate the position of all the major planets (and many less-obvious celestial bodies) at any given time.  This is by no means a trivial task, as it is affected by the relative tilt of the orbits of the earth and planets, and the different time it takes for each planet to orbit the sun, and of course the time of day, season of the year and location of an earth-bound observer.

These factors make it difficult for an inexperienced observer to locate the planets – indeed they are not always visible, since this needs them to be above the horizon when it is dark, and just like the moon, this may not be at ‘social hours’.

So I am thinking how to make an astronomical clock that will show the altitude (height above the horizon) and azimuth (compass direction) of each of the major planets.  Each planet should have these two values shown on a single dial with two concentric hands.  However, the two values don’t progress in the simple orderly manner of the moon – whilst normally they orbit east to west across the sky, sometimes they make a ‘retrograde motion’ – they appear to orbit in the opposite direction.  This is only an optical illusion caused when the earth and the other planet pass each other in their orbits, but is hopeless for a hand driven by a clock motor, as this can only go one way.

I don’t have the clockmaking skills to create concentric gearing.  The altitude can be managed with a dial that has 90 degrees at the top and 0 degrees at the 3 o’clock and 9 o’ clock positions, and -90 degrees at the bottom.  So I am wondering if it might be possible to take the central ‘seconds hand’ spindle out of a clock movement and to put a two-phase stepper motor with a very long spindle through the clock movement.  This can be used to show the azimuth and can go in either direction.  Much bodging will be needed, but could be quite good.

Food for thought, but I can see I will be getting into trouble for being ‘too distant’, ‘head in clouds’, ‘somewhere else’ – and all this would be absolutely true – my mind will be literally ‘on another planet’!