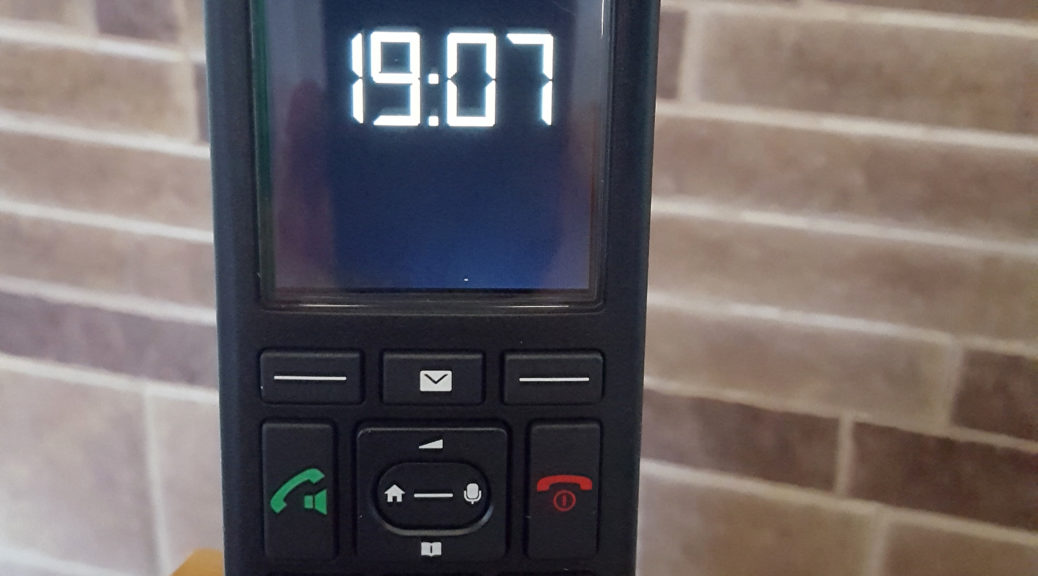 However, I already have two Sipgate accounts which my partner and I use for our businesses, but in reality she uses her mobile phone for business and her Sipgate line is almost unused.  This is because it has a wired-in handset that is not in a convenient place.  So I decided that it would be better to get a cordless handset for that phone, so it is more convenient to use.  This would be cheaper, even for a high-quality handset, and would require little setting up.  If she likes the VoIP line, then I can transfer the landline number in due course.  The DECT handset can then be used either on the new VoIP line (with an adapter) or can replace one of our other ageing DECT handsets.

I did a fair bit of research and it seems that the main choice is between Panasonic, BT and Gigaset.  The BT offerings look fairly nice, but with a colour screen they are quite expensive. Plus, the ‘base’ station is incorporated into one of the phone charging bases, so has to be close to the main telephone port. As I’ve said, this is not in a convenient place.  Panasonic do DECT phones with a colour screen, but as far as I can tell, not with a separate base station.

So then I looked at Gigaset phones.  I’m not familiar with this brand, but they claim their product is made in Germany.  Their C570 model has a 2.2 inch colour screen and separate answering machine/ base station, and extra handsets (which are GAP compatible) at a competitive price, so that’s what I went for after checking out some reviews.  The price including two handsets was £99.00. They have been simple to instal, and (something my partner is very keen on) you can turn them to energy-saving mode which allows the handset radio to sleep when no calls are being made, checking in once every two seconds to see if there is an incoming call.

So far, we have been delighted with them.  The pay-back time will be more than a year compared with the BT ‘anytime call’ subscription (not counting the additional convenience of answering business calls) so we will see how it goes.

UPDATE: I decided to download the pdf manuals for the C570 so I can discard the paper ones.  I noted that they were in the ‘legacy’ section of the Gigaset website, so obviously that model has been discontinued, which would explain the good price.  Looking at their current offerings, the nearest similar one is the S850A GO.  This can do both landline and VoIP, but costs £100 for one handset. It has quite a lot of useful additional features.  Oddly, the Gigaset website doesn’t point you to additional handsets, which is a strange omission. The one on their website that looks most similar costs £50.