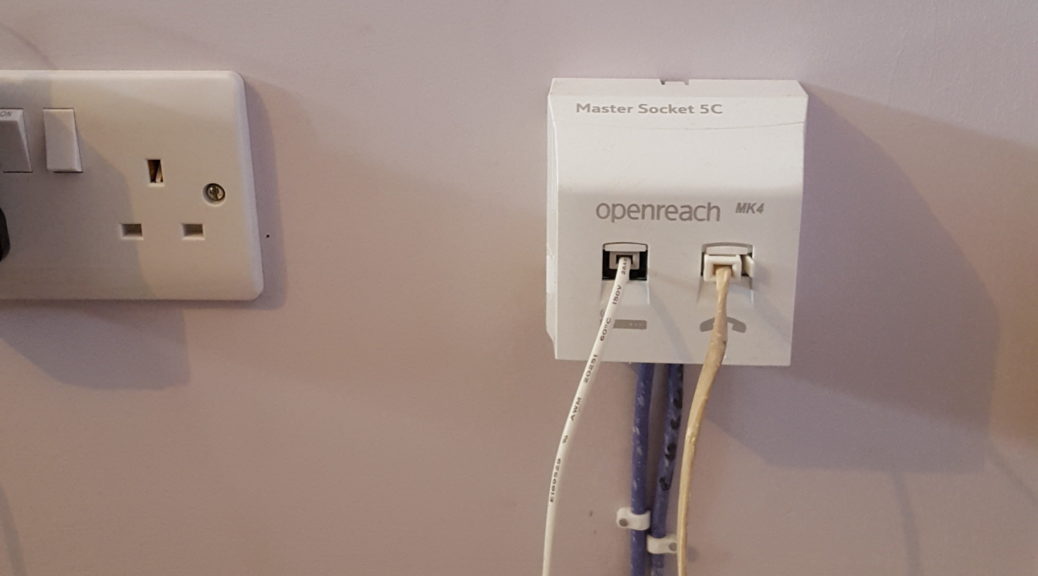 Determining that the line is live

In the previous post, I explained that BT advised me to instal a new master socket myself.  My builder had installed a 4-pair cable (probably a standard CAT-5 network cable) from the BT drop-wire to my workroom (although I have no idea where the junction box is hidden), and had pushed the white/green pair into an old socket, so I guessed these carried the line. The CAT-5 network cable is not compliant with the UK telephone standard, but no matter.  A telephone line usually only requires a single pair nowadays, although my system originally had an earth connection from an earth rod near the drop wire, but this has long since been disconnected.   Earth wires were originally installed as part of a spark suppression system in the days of long overhead wires and in some cases were used as part of the exchange-calling system on so-called ‘party’ (i.e. shared) lines.

In the idle condition, the network pair carries a potential difference of 50 v DC, with the so-called A-leg being at 0 v and the B-leg at -50 v, relative to earth.  The polarity on the pair only matters in a few special cases, but I wanted to do the job properly, so I measured with a voltmeter to confirm that the line was active and determining that the white/green wire was 0 v (making it the A-leg) and the green wire was at -51.2 v (B-leg), see photo below.  This told me which wire to put into each of the terminals.

It is safe to touch the wires, although always wise to avoid this for the reasons I’ve previously mentioned.  However, if someone rings the line whilst you are touching them, you will get a nasty zing, because the ringing voltage is about 75 v AC at 18 Hz.  I believe that now it is around 100 v at possibly slightly higher frequency.  So the peak voltage is √2 times this, i.e. about 140 v, and the peak-to-peak is twice that, so plenty of juice to sting you.   Remember the electrician’s mantra – keep one hand in your pocket!

The NTE5c socket is a clever piece of design. It is in three parts – a standard-sized back-box that is fixed to the wall.  Then the base plate.  The drop wire is connected to a 1-pair cam-lock connector on the back of the base plate, marked A and B. Nothing else. The Base Plate is then fixed to the back-box by two screws.  This demarcates OpenReach’s ownership from the subscriber’s, who is not supposed to remove these screws.

On the front of the base plate is another cam lock connector, this time with three terminals, marked 2, 3 and 5.  They have kept the historical numbering, even though the other wires are no longer used.  Wires 2 and 5 carry the speech  and correspond to legs A and B, whilst wire 3 is the bell wire, and separates the AC ringing current from the DC loop current by means of a capacitor.  The Master Socket also used to have a surge protector across the A and B legs.  This was a small neon tube that would discharge a potential above a few hundred volts, preventing damage to the instrument or a shock to the subscriber, but the gas-filled tube also acts as rather a noisy capacitor at high frequency and thus makes the line noisy for the broadband signal, so it is no longer fitted.  It does mean that there is less surge protection than in the past, but this is much less of an issue than in the days of miles of uninsulated lines carried on overhead poles.  [I was once in a house during a violent thunderstorm when the fuses in the drop-wire junction box blew out.]

You don’t need any tools to connect the wires to the camlock connector. You lift up the clear plastic tab and then, observing polarity, push both wires through the front holes, then making sure to keep them straight,  through the back holes. It’s not quite so easy to keep them in place when fitting three wires – one can easily spring back.  If the wire isn’t through both holes, it may not be properly forced between the terminal prongs when you push the plastic tab back down. I would say this is a slight issue with the camlock connector.

Having connected the network wires into the rear of the back plate, secure it to the back-box with the screws provided.

You will see that there is a socket for a telephone plug on the front of the back plate.  Plug in a standard (non-powered) telephone.  You should get dial tone (you may need to wait a few moments) and be able to make (and receive) a test call.

So your line is working! Excellent.

Returning to the NTE5c – you, the subscriber, can connect all your hard-wired extensions to the 3-way cam-lock connector on the front of the back-plate.  However, until the front plate is inserted, there is no connection between the exchange line and the subscriber’s wiring.  Instead, if you look carefully at the telephone socket in the back plate, you will see three wires at the bottom which are not connected when inserting an ordinary telephone socket, as these have no pins on the bottom edge. However,   when you plug in the front plate, this has a special plug that connects wires 2, 3 and 5  to the terminals on the front of the back plate, thus connecting your extension wiring to the exchange line.   The beauty of this is that when the front plate is removed, the exchange line is completely disconnected from the rest of the internal wiring, so if you can’t get dial tone from the socket in the back plate, the fault must lie of BT’s side of the system.

As I understand it, two types of front plate are available.  One just has an ordinary telephone socket on the front, and the other has a telephone socket and a broadband socket with the necessary filters being built into the front plate, as in the illustration at the top of this post.

As mentioned, the front plate has a special plug that goes into the telephone socket in the back plate, but at the same time, connects the internal wiring circuit to the exchange side of the circuit.  The front plate is kept in place by two spring lugs and can be easily removed by the subscriber.  The idea is that if your line goes down, BT can ask you to remove the front plate (no tools needed) and ask you to plug the phone into the socket in the back plate.  If this works, they know the fault is on your side of the system.  They can then charge you whatever to come and fix it, or no doubt there will be independent firms who can investigate, perhaps more cheaply.

That really is a brilliant wheeze!

The builder had run another 4-core pair to the position of the extension bell.  So I have re-fitted the bell and connected the blue and white-blue pair to terminals 2 and 5, and the orange wire to terminal 3 on the front of the back plate of the master socket.  The extension bell solenoid is connected at the other end to blue and orange wires.  The label in the bell-box states that as connected, the solenoid offers a resistance of 1000 Ohms, which is, I think, below the presently recommended value, but has always worked well.  Possibly it may not be so happy if there were more ‘ringers’ on the circuit.  Having now tested it, it is extremely loud, so there is plenty of current at the bell.

On a related subject, where does the ringing current and all the other system tones come from?  In the old Strowger exchanges, there was a ringing machine at the end of each rack, basically a motor-generator set.  The generator had a number of different windings to generate the necessary tones and a cam-operated set of contacts interrupted the tones to produce the brr-brr ringing cadence.  I can remember having an argument with someone who said to me ‘The phone is ringing at the other end’ and when I said ‘how do you know’, they said ‘I can hear it’.  They just could not understand that the ringing sound they could hear was supplied by the exchange, and was not the bell at the far end!

I hope this gives you a bit of insight into the telephone system and will allow you to instal your own master socket when necessary. Take care as always when working with electricity, especially at height.