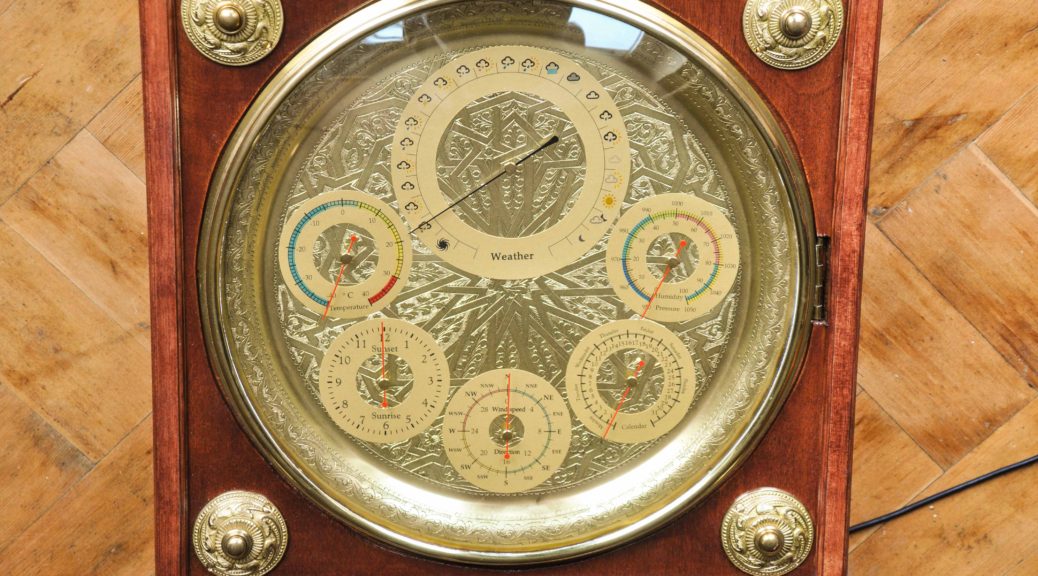 This page tells you about a ‘Barometer’ that I have designed and built. In reality this is not a meter that measures barometric pressure at all … it just shows the current weather forecast broadcast by the BBC on a series of dials – an analogue display.

My original idea was to build a clock to show the real ‘sundial’ time, the phases of the moon and so on, but we thought that a device to display the weather would be more practical use.

This has turned out to be a much more complicated project than I ever imagined.  If you are interested in how the design progressed, then look at the ‘Diary’ pages of this website.  This page just shows a few pictures.  The barometer works but it is not finished because there are still some practical issues with it, which I will continue to work on as time permits.

The Barometer is driven by a Raspberry Pi computer, which is a tiny computer the size of a mobile phone.  Despite its size, this is every bit as powerful as a desktop computer of a few years ago, and it powered by a processor that was designed for mobile phones. However, you can plug a keyboard, display and hard disk into it.  But it also has a number of digital inputs and outputs that can be connected to drive other devices – the coloured wires carry the connections.

There are six dials are driven by tiny electric motors shown in the picture above.  These motors were made for driving the dials in an American car, so they are ideal for the present purpose. They are called ‘stepper motors’ because the spindle that connects to the dial pointer moves in steps, each one is about half a degree of rotation, so you can set position of the pointer accurately.

The face of the barometer is a brass tray 13½ inches in diameter. I got it from a local charity shop. It was completely black and looked awful, but some Goddard’s Copper Polish soon revealed its true beauty.

I wanted the barometer to look interesting, but I’m not much of a woodworker and I didn’t want the job to take for ever, so opted for a square case to be made out of plywood.

I began to realise that the face and the dials would be vulnerable to dust and damage unless they were protected.  I found that you could buy convex glasses for old clocks and thought I could somehow fix this over the dial plate maybe with mastic. But this seemed a bit crude, and further research showed that  I could buy a bezel and glass exactly the right size (14 ” diameter) from clockmaker’s suppliers.  This was very expensive but by now I was keen to make it look good, not just to be a fun bit of electronics.

Originally I had intended to use some nice rotary switches to adjust the settings of the barometer, but on a bell-ringing outing with my daughter, we saw a 1906 car at a pub, and I was fascinated by all the brass knobs and switches which looked as though they’d been made for something else – but that’s what car makers did in those days.  I had originally thought I’d put decorative spandrels in the corners of the square case, but I realised that decorative bell-pushes would look much more mysterious and interesting. I found some exactly the right size on ebay.

It would take pages to describe the electronics, so I will just show a photo. The six white rectangles are tiny plug-in circuit boards that send the pulses to drive the six dial motors. You can also see the bell which is used to tell the user when the barometer is doing something and you can see the actual button part of a bell-push too.  The coloured wires from the Pi plug into the white socket you can see on the left of the circuit board. 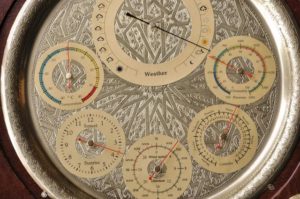 Here is a close-up of the dials. I will tell you more about them when I have a moment.