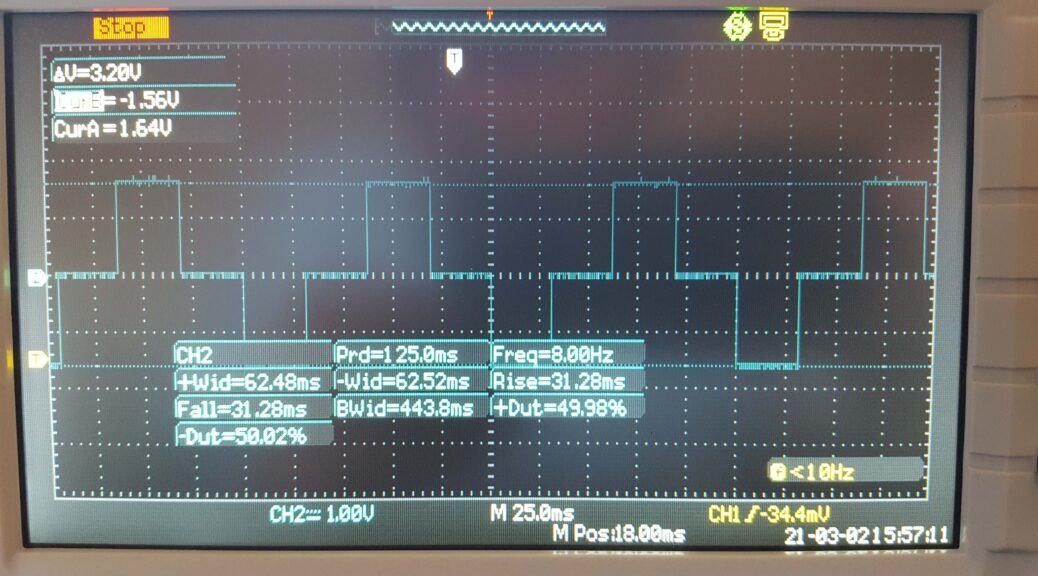 I took the plunge and bought an ‘RS Pro’ RSDS1104CFL Digital Storage Oscilloscope.  As you could almost guess from the name, it is a 4-channel scope with 100 MHz bandwidth.  So far I’m just getting used to it.  The instruction manual is written in Chinglish.  For example, the introduction is headed ‘Accidence’ and tells me that there are four ashen buttons on the front face.  I can’t imagine what they were trying to say.

The first thing I’ve done with it is to investigate the waveform that drives a quartz clock movement with a ‘Sweep’ Seconds Hand.  This is one that moves continuously rather than in 1-second jumps accompanied by a loud tick. 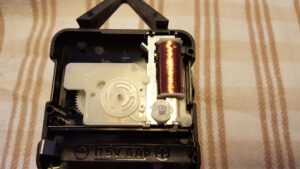 This photo shows that it is driven by a ‘Lavet’ motor that is identical to that in a one-second stepping clock.  The difference is that there is an extra set of reduction gears, so that the rotor (the little round thing just below the copper coil) can turn more quickly. 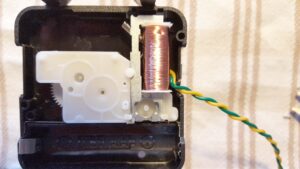 I soldered a pair of wires to the terminal pads connected to the two ends of the copper coil.  They are underneath the coil so you can’t see the connection in this photo.  I connected these to the new oscilloscope and adjusted the display until it showed a steady waveform, see below.  You will see that the motor is being pulsed with a positive 1.5 volt pulse, followed by a rest at zero volts, followed by a negative 1.5 volt pulse and another rest at zero volts. 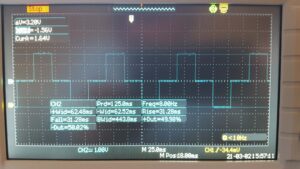 Using the measurement system built into the oscilloscope, we can see that the pulses are at a frequency of 8 Hz (8 pulses per second).  Each pulse, and each rest period, is of the same duration, 31.28 ms.  Since there are two pulses and two rest periods per cycle, the period of the waveform is 125 ms (one eighth of a second). [In fact, each pulse should be 31.25 ms long, so perhaps the rest period is marginally shorter, or maybe it is measurement error.]  So this motor is fed with pulses at 8 times the frequency of an old-style stepping clock, but has extra reduction gearing so that the seconds hand appears to rotate at a steady rate of once per minute.  Note that the gearing ratio is 1 to 8, which is of course a factor of 2, and so fairly easy to get from the same binary counter chip as the normal one-second pulse.  Indeed, it looks as thought the chip probably has an (unused) one-second output as well.

What is interesting to me is that the pulse duration is very similar to the 25 ms that I found to be optimum for my moon clock, and the pulse and rest periods are the same duration, again as I found optimum for the moon clock.  My 25 ms pulses will give 10 revolutions per second, which is slightly faster than the 8 rpm that this clock is using, but of course 10 is not a power of 2, therefore not so easy to derive from the binary counter.

I think that I can conclude that if you want to drive a Lavet motor fast, for example when setting to a particular time, then the pulse and rest period should be equal and that 25 ms pulse and rest periods are pretty close to the shortest which will work.  Note that although you might be able to use a shorter pulse with a higher voltage for the ‘on’ part of the cycle, the rotor must then continue to the next rest position under the power of its permanent magnet.  If you don’t allow enough time for it to rotate, re-applying power for the next (negative) pulse can actually make it return to its previous position. In this case, the rotor could vibrate between two positions and thereby lose its position.  And a steady rotational speed will help to maintain the inertia of the drive train and hopefully give less vibration.  Vibration of a large seconds hand could cause the rotor to spring backwards.

So the scope has already proved to be very useful and I will describe some of its workings in a later post.